HAROLD Arboleda dished out another double-double performance — his sixth  in the MPBL Datu Cup.

Not only did the hardworking Arboleda fulfill his role as the Parañaque Patriots’ double-double machine on Tuesday night, he also delivered as “Mr. Perfect.”

Arboleda made all of his field goal attempts on his way to a career-high 26 points to power the Efren Uy-backed Patriots to an 81-73 win over the Cebu Sharks-Casino Ethyl Alcohol in the MPBL Datu Cup.

Arboleda, a former player of the  NLEX Road Warriors in the PBA, registered his sixth career double-double in the MPBL. He pulled down 11 rebounds and also dished out six assists in a brilliant all around game that rubbed off on the rest of the Patriots. For Arboleda, his performance was simply a product of hardwork.

Arboleda made all of his seven attempts from the field and went perfect from beyond the arc, making all his five shots. He also made two from the 2-point region.

Playing in front of their hometown crowd since winning Game 1 of their semifinals series against Muntinlupa last season, the Patriots struggled in the early goings, trailing by as much as 15 points, 32-17, in the second quarter.

But the Patriots clawed their way back into the contest as they held their rivals to only two field goals for nearly seven minutes in the second quarter and ended the half trailing by only a point, 38-39.

Over the next two quarters, the Patriots were able to battle the Sharks toe-to-toe, but an 11-0 run to start the final period, allowed Parañaque to put away Cebu for good. 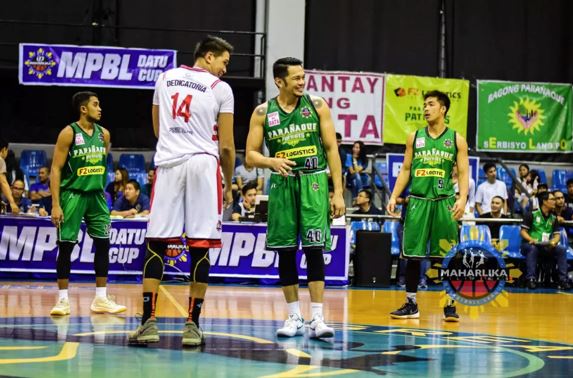