Efren Uy leans back on his chair and stares at a projector screen inside the F2 Logistics office boardroom. This is how he first introduces the company to people who are not fully acquainted with the logistics industry—through a presentation of their company profile.

A few minutes into the presentation, the company’s vision are flashed on the screen: F2 Logistics wants to be faster. Better. Stronger. If that sounds familiar, it’s because it wings at the Olympic credo. And it figures. Uy, the company’s president and CEO is a sportsman.

“I’ve always been involved in sports; I was an athlete when I was younger,” said Uy.

And outside the business circles, inside the sporting arena, F2 Logistics is proving to be faster, better and stronger than the rest of the field in the Philippine Superliga.

With already two titles in their trophy case, the Cargo Movers are more than equipped to defend their Grand Prix crown despite a bulk of their stars struck out of the roster while they’re on duty for La Salle in the UAAP.

“We will lack some key players, but we will be fine,” said head coach Ramil de Jesus.

Uy brims with the same amount of confidence, pinning his hopes on former La Salle stars Aby Marano, skipper Cha Cruz, peerless setter Kim Fajardo and the ultra talented Ara Galang as the Cargo Movers hope for a repeat of their dramatic conquest of Petron in last year’s Finals.

“That was such a memorable win,” said Uy. “We were already behind in Game 2, 0-9, and I remember some fans were already readying banners but we fought back and forced a fifth set. And then we won that fifth set and the momentum had already shifted to our side in Game 3.”

More than the victory itself, Uy is appreciative of what the Cargo Movers have done for F2 Logistics as a company.

“You know, after that win, people in the office started using that victory as an inspiration,” he said. “They keep telling themselves that if [the Cargo Movers] can do it, then nothing is impossible in work.”

And the inspiration goes a long way in an industry that bleeds the clock dry with its nonstop activity. Whether it’s delivering life-saving medicines on time to where it is needed to keeping supermarkets stocked with fresh produce, logistics and cargo giant, F2 Logistics delivers to the Filipino public providing them with their needs on a daily basis.

But the Cargo Movers have done their share of pumping up the energy of the workforce with their smashing victories on court. And they provide inspiration elsewhere too.

“Believe it or not, these girls volunteer for a lot of our outreach programs,” Uy revealed. “A lot of our players know what it is like to grow up amid hardships so some of the girls, like Abby and Cha, they really want to open doors for others and volunteer to do clinics for us for free.”

In a way, the Cargo Movers are a perfect reflection of the company they represent. From its humble southern roots “where we started with three branches and just a handful of trucks,” F2 Logistics has grown to more than a thousand trucks nationwide, providing world class warehousing and logistics services.

The Cargo Movers traced more or less the same route in the PSL. They began “just wanting to be competitive,” said Uy, hiring such standouts as Cha Cruz, Aby Marano and Paneng Mercado to lead the young team.

But after a third-place finish in their first year, Uy felt he needed “to beef up the roster.” While shopping for added talents, Uy made a partnership the De La Salle volleyball squad, which did not have a company to back them up yet; “with an already established team and led by one of the best coaches in the Philippine scene, we always aim to be the best ” said Uy.

And the rest is history. The partnership has resulted in not just two PSL titles, but a championship for La Salle as well in the UAAP—the Lady Spikers are also backed by F2 Logistics in the collegiate league.

With the PSL now in full swing, the Cargo Movers are now chasing for more success in a season that holds a lot of promise for the squad. 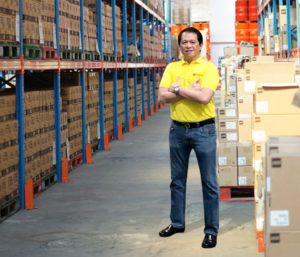