Shortly after Malacañang vouched its full support, the Senate rolled out the red carpet for the PSL-F2 Logistics squad that will campaign at the FIVB Women’s Club Championship from Oct. 18 to 21 at the Mall of Asia Arena.

No less than Senate President Aquilino “Koko” Pimentel welcomed the squad, who will battle the best club teams in the world in this prestigious tourney organized by the Philippine Superliga and Eventcourt with TV5, Petron, Asics, BMW and F2 Logistics as official partners and Diamond Hotel as official residence.

Sen. Alan Peter Cayetano, local organizing committee honorary president, said this would be the first time for the country to host a massive women’s volleyball tournament such and it is only fitting for the government to do everything to support it.

“The best club teams in the world will be arriving starting this week,” said Cayetano, referring to the spectacle that also has Rexona, Philippine Sports Commission, Mall of Asia Arena, Foton and Price Waterhouse Cooper as official sponsors and Turkish Airlines as official airline.

“So more than supporting our team, we also support the people behind this massive endeavor. Rest assured that the government will be behind you in making this tournament a success.”

Foreign players Ekaterina Krivets of Russia, Yevgeniya Nyukhalova of Ukraine, Tichaya Boonlert of Thailand, Yuri Fukuda of Japan, Stephanie Niemer and Lindsay Stalzer of the United States and Lynda Morales of Puerto Rico were also there.

“The support of the government is very overwhelming,” said Suzara, a ranking member of the Asian Volleyball Confederation and the International Volleyball Federation. “We’re very thankful to the Senate for boosting the morale of our team and the local organizing committee. We promise to do our best to make the country proud.” 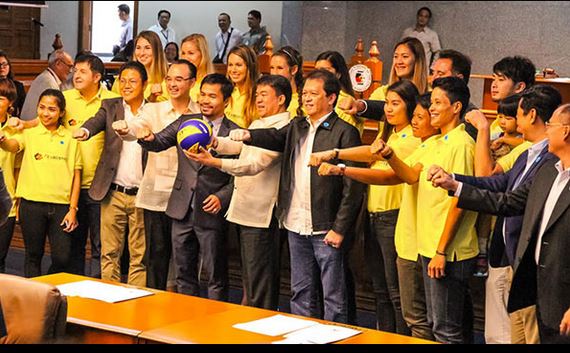